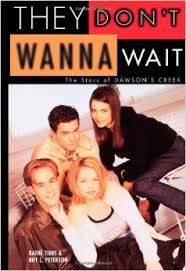 If you’ve been keeping up with my blog, you would know that I LOVE Dawson’s Creek (second only to Daria). I was born in 1990, but I really should have been a teenager in the 90s if you judged by my interests. One weekend while I was visiting my parents, I had Dawson’s Creek on the brain and was cruising on Amazon. This was on my wishlist for a while and I noticed they discontinued the Kindle version, but the paperback edition was quite cheap. I also snagged a trilogy series that puts the Dawson’s Creek characters in a horror story, and I can’t wait to read them!

This book was written around the time that the third season was about to air. It contains bios of the main characters (hello, Joshua Jackson!), the creation of the show and its influence to pop culture, and has a lot of interesting information on creator, Kevin Williamson. I skipped the last couple of parts because it was basically a recap of the first two seasons and I’m in the middle of rewatching the series.

It was great to find out that Joshua Jackson is a Nirvana fan. (Me too!) But Mr. Williamson’s story was the most entertaining part for me. I never would have guessed that the teacher from Teaching Mrs. Tingle was actually based on a real life teacher of Williamson’s that constantly belittled his abilities. Teaching Mrs. Tingle is actually one of my favorite films, despite it being a box office bomb.

Now days Kevin Williamson is known for working on the Vampire Diaries, but before that and Dawson, he was the creator of the Scream movies. I also learned that he also wrote the script for the Halloween H20. It was really cool finding out all this information about one of my most beloved writers. Minus the Vampire Diaries, ugh.

I couldn’t give this book a star rating because it is not listed on Goodreads. But if you are a fan of Dawson’s Creek or Kevin Williamson, I highly recommend it. It’s really cool owning this little piece of the 90s.