Hey, guys. I know I’ve been gone for a super long time. So, I’ll try to get you up to speed as best as I can.

Well, the initial reason for my absence was that back in the late summer of last year, a large flood came to my area of residence. We were without Internet for a month or so and my in law’s house is going through a remodeling stage. At the time, I also had an overabundance of freelance work to do. Needless to say, vlogging and blogging was put on the back burner.  My Youtube channel hasn’t been updated in forever either. I WILL get on that one day. 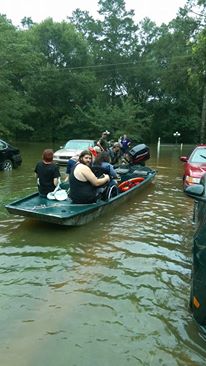 But here’s the better news. We have gotten our own place! That’s right! Me, hubby, and his brother have moved into a house. It’s a rental, but you know, baby steps. We had the Internet put in last week. So, I’ll probably be around a lot more.

That is pretty much the short version of what has been happening. I’ve also made a decision. I will finally buckle down and try a hand at writing a novel. Won’t give out too many details about that at the moment. But I will tell you that it is in its infant stages. As in, I am writing character details and such things in my journal. I figured that would be a good place to start. 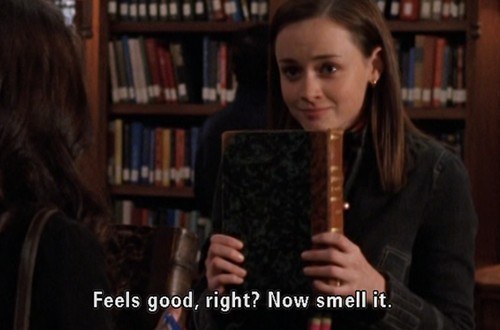 Well, I guess that’s it for now. I look forward to talking to you guys again.

Oh wait! I got a new puppy! 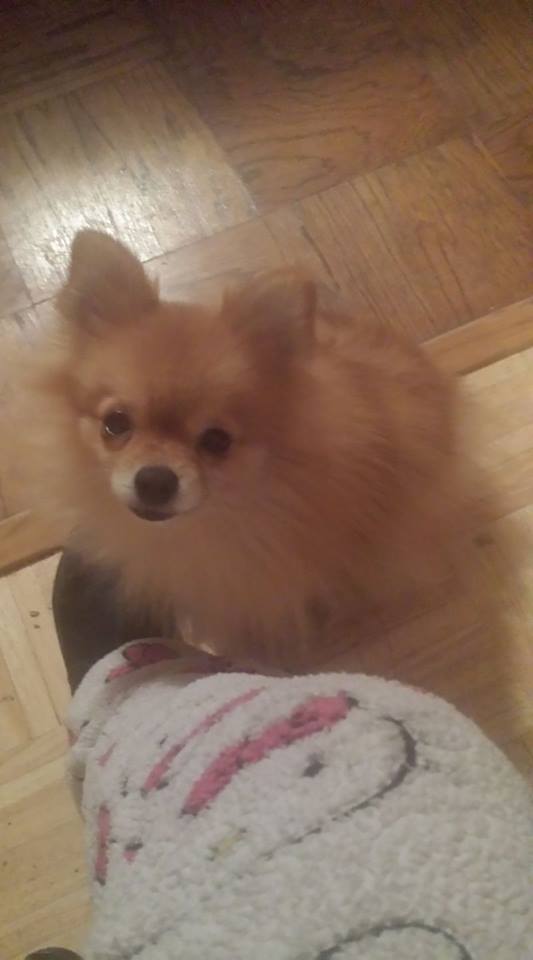 Her name is Myrtle.

Hi everyone! I know I’ve been off the radar for a while now. Things have been a bit busy lately. I’ve been swamped with my freelance writing lately. I took my library test last week, so now it’s just a waiting game. Hopefully, I passed my exam so that my resume will be sent out to all those libraries. That would be my dream job. I must admit it was much harder than I thought it would be. But the instructor informed me that all I needed was a 60.

It won’t be too long till I post another book review. I’m getting closer to the end of Hitchhiker’s Guide to the Galaxy.  I’m reading the whole collection in one book, so I’ll review each individual novel separately. I’m going through it slower than I would like. It just isn’t holding my attention too much just yet.

As for my beauty reviews, I’m stilling going through the Body Shop products. At the moment, I’m not too impressed with the results. However, I’m still working on the Vitamin E line and there is still the Aloe Vera line sitting in my bathroom. I ran out of moisturizer though, so I have tried the Aloe Vera moisturizer. Meh.

I have discovered LUSH recently and decided to try their “Grease Lightening” acne fighter because my Terminator Ten acne fighter wasn’t as good as the one that came in the AcneFree set. Wow. I love that Grease Lightening stuff! It really reduced some of my larger zits fast. It is really pricey though. It’s about $15 a bottle. But the nice packaging and promise of handmade natural products have reeled me in. The Aloe Vera moisturizers for the Body Shop are really small, so I have ordered the Imperials moisturizer from LUSH and I can’t wait to try it.

Before I end this entry, I want to give a shout out to http://veganneeds.com/ for nominating me for the Bloggers Recognition Award. Thank you so much! Sorry, I didn’t post it up. I’m a little burned out on typing now. Hopefully, it won’t be too long till the next entry.

Today, after I got out of the shower and got ready for a shift at Sylvan, I got a call from the boss saying I couldn’t work there. I needed a teaching certificate. You can imagine the anguish I felt. So, I decided that’s it. I’m going to take the test that will allow me to work at the public library. You see, I’d been putting it off because it seemed like more trouble than what it was worth. However, when I went to the website to read on what I needed to know about the test, I discovered that I had been looking at the wrong library position. I want to be a library tech and I was looking at the library page position. The test that the library tech has to take covers reading comprehension, communication skills, and problem solving. That will be a walk in the park for me!

So, I’ll be taking the exam in September. I’m actually much more excited about this because I’ve always wanted to work in a library. The pay, hours, and benefits will be much better too.

With that being said, there was one thing I forgot to include in my reviews yesterday. 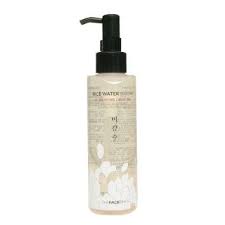 Wow! I love this stuff! I got the idea to buy this from Asian beauty trends. They do a method called “double cleansing.” Basically, they cleanse their face with a cleansing oil like this one before they wash with a face wash. This cleansing oil does a great job of removing make up, especially the stubborn eye make up. It also makes my face much brighter, which is something I need. I plan to put this in my regular routine once I get rid of my Noxema Cleansing Cream. The smell is amazing too! I’m debating on whether or not to buy a face wash from the Face Shop. Since, I have so much stuff already. Maybe if I’m not satisfied with the Body Shop. Try Amazon to order, much cheaper.

Heh, I hope you guys like the Stone Temple Pilots reference. I haven’t been blogging these past few days because I took some time off to dedicate to job hunting. I never heard from that company that wanted the second interview, so it is safe to assume that they went with someone else. Bummer.

So far, things are looking up a bit. I did manage to find a few jobs I was qualified for that are in my field. I just applied for them yesterday, so we’ll see. So far, the only one I’ve heard back for is only a part time gig that is a little far, so it may not be worth it. I’m still going to do the phone interview and see if full time is possible.

A few goodies I ordered should be here today, so reviews will be coming soon. I haven’t really tried out the new supplies I bought at Target yet because I haven’t had any reason to wear make up and it is really hot outside. But if you guys remember one of my previous posts, I discovered I had eczema and not rosacea. I’ll be trying out the new face wash, lotion, and ointment soon. My translucent powder and eye shadow primer are almost here and the foundation I picked out of the three is on its way!

I know it seems like I buy a lot of stuff for the sake of beauty, but I actually buy everything in a certain price range and make sure my bills are paid off first. But lately, I have been worried about our financial status. I’m still unemployed and my fiance is at a dead end job, However, he is getting tutoring for his GED and has been working very hard at it. And at least, I’m getting call backs, right?

Despite all that, I still find myself getting depressed at times. I really hope we can get at a better place soon. Especially because my fiance’s dad just informed us that their rent house will be available in a month. His current tenants are moving out. He said he would even lower the price for us (me. my fiance, and his brother). If I can get a job soon, MAYBE we could do it. But right now, it’s just not feasible.

Last night was wonderful though. My fiance and I stayed up and watched a couple of hours worth of Daria. We’re almost done with the series and it’s great to share something that is so near and dear to me with him. We laughed at my hero’s sarcastic wit and cuddled. That show will forever be in my heart as a childhood through adult relic.

I wanted to post this last night but I found myself being tired and half-sleep. Oh, and sorry if some people may be annoyed at my recent influx of Daria posts. Can’t help it, it’s my favorite show.

Anyway, last night I found myself gushing to a new friend I’ve made about my boyfriend. Later, the little ugly voice that everyone has in their heads, decided to make it known to me that I don’t really deserve him.

I think it’s a mixture of different things. I am starting graduate school tomorrow, I had an embarrassing panic attack at his house Monday, and now I have a huge zit on my nose. I know it’s also my physical condition as well, but that’s a given. I know that my CP doesn’t affect me as a person, but some days are always going to be harder than others. Sometimes, it’s going to get me down, it’s human nature.

I did some deep thinking last night and I’ve come to realize that I think I don’t deserve him is because I think of him so highly. I look back at all my exes and I see them as little boys and when I think of my current man, well I see a man. Because of this, I have a fear of being taken away from him if I don’t succeed.

My family may disagree with me because he only has a part time job and no high school education. But that doesn’t make a man. Success doesn’t make a man. Sure, a man should be able to provide, but I have faith in him that he will get there. But there are other things that make a real man.

Things like kindness, honesty, and loyalty. Trust me, I never got all of these things with my exes. And for one ex in particular, I never got any. But my current has all of these and more, I can’t help but sometimes think I’m unworthy. I know he’s no where near perfect, but he’s definitely no boy. Man-child, at times though. But hey, sometimes that’s needed.

Everyone feels unworthy at times and it may be worse for others that have a problem like me. But at the end of the day if it’s over a relationship thing like this, you have to remember they chose you.

I will close with some Daria quotes I think cover my situation. Daria is my hero. 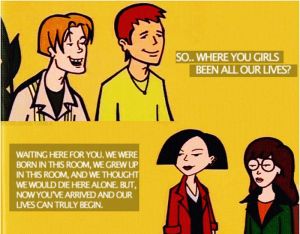 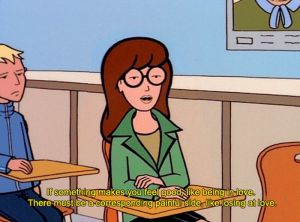 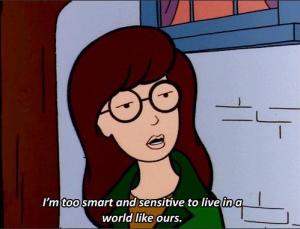